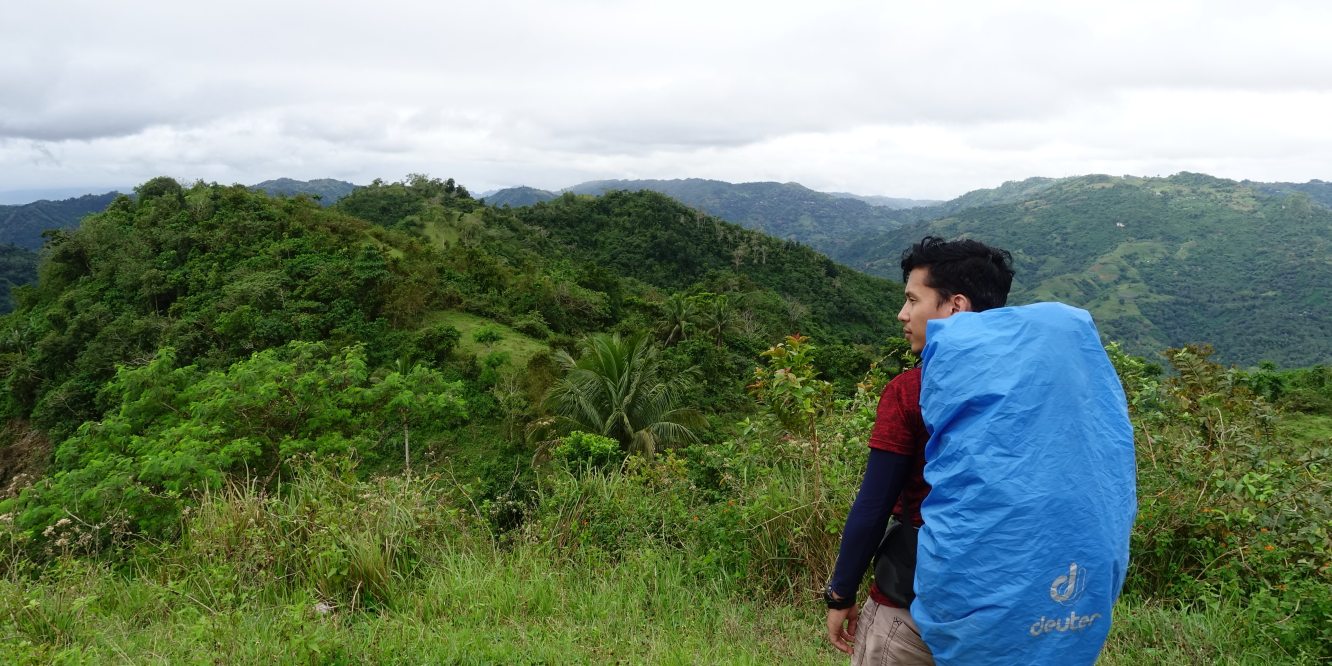 Bocaue Peak maybe one of the lesser known camping sites in Cebu. Well, at least for me. “The Muffin Peak” so it is dubbed by few climbers. There are different versions of arguments as to why Bocaue Peak is dubbed as ‘The Muffin Peak”. One that sounds legit and another that might just be a joke but reasonable. Some say that it is called so by the way the peak resembles and like a muffin when seen from the nearby mountain. Others say it is because of the abundant presence of cow-dung on the trail, which can also resemble a muffin by the way. Either way, it is up to you of which you are going to stick on to. Or better yet, you can go and see the peak up close and find out why. Maybe then you can have your own theory why it is dubbed that way.

Late January of this year, we embarked once again on another trek in Bocaue Peak. It was my second time in Bocaue after our quick spontaneous day trek last December. For more details on my first trek in Bocaue, you can check my blog here or you can go through my vlog on my Youtube channel. As to the detail of the trail, you can also refer to my other previous blog here. I already detailed the best that I can about the trail and my first trek experience in Bocaue, so I won’t be talking about it much here. This was my second time climbing the Bocaue. But this time, we will be spending a night camping near the peak. The trek was actually one of the set pre-climbs for our upcoming major climb in Mt. Talinis, which I will be blog posting soon.

The night before our trek, I got really busy in setting up this site and migrating my old blog posts from my previous blog site. Up to this speaking, I haven’t successfully migrated all my previous posts yet. I stayed up until dawn at around 3 o’clock in the morning and we have to assemble around 9 in the morning for our trek and I haven’t packed my bag yet. Went home and did a quick packing and had my short nap for just an hour or two before getting to our assembly area. I swear everything looked like as if the world was swirling. I was really haggard on that day, but thankfully I still managed to get up and arrive at our meeting place on time. 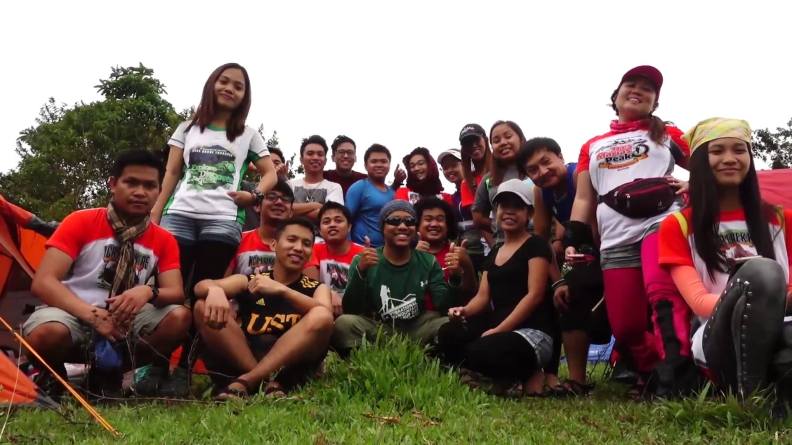 The Old and the New Faces.

Few people were already in the assembly place when I arrived. I noticed several familiar faces from the NCR Trekkers club. There were also few acquaintances like Kring, and Master Lai of The Little Lai. I know Master Lai is a travel blogger and I have seen and read some of his adventures from his blog, but this would be my first time seeing him in actual action.

As time ticked, one by one, people arrived at the place. As usual, Wandering Soul Scamper and Four Eyed Laagan were also present. I’ve trekked and camped with these two travel bloggers before prior to this one. There were also new faces on the pack like James who is a fellow local travel Instagrammer and who was invited by Four Eyed Laagan on that day. 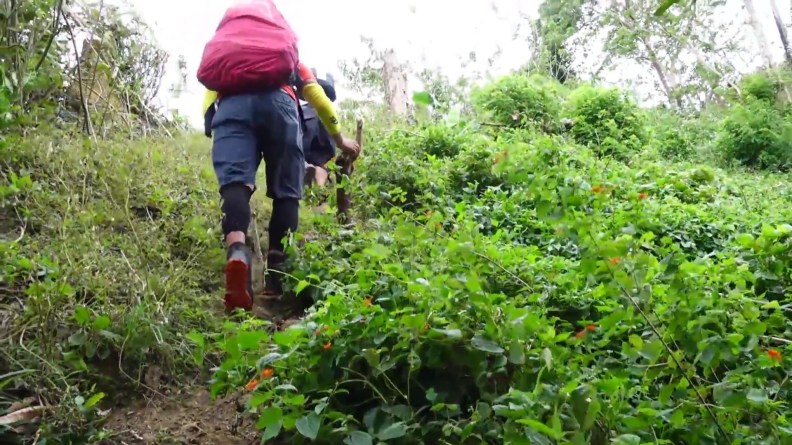 Unlike my first climb in Bocaue, which was just a day trek so we did not carry much weight, this time we carried our humongous bags where we packed our tents together with the rest of our gears and meals. Climbing a mountain, there will always be a huge difference between carrying light and a fully-packed bags. Obviously, this affects the pace and the amount of energy exerted by each individual. With our weighted bags, it really was a challenge, especially during the ascents. Without proper preparation and training, one’s legs would surely give up. 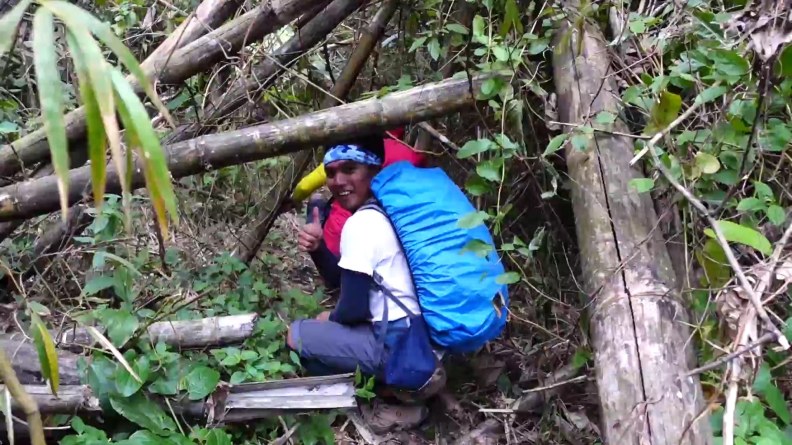 For this trek, again we chose the 5-tower trail. Not everybody on the group has been to Bocaue nor has everybody been to the 5-tower trail. As usual, every trek starts off quite good and okay. It’s when the trail starts spilling its harsh nature that you’ll see the limits of each person. The weather was quite good. Thankfully though, it was not piercingly hot. The sun gave way and hid behind the brewing clouds. As we gained distance, so did our energy depleted bar by bar. I was already familiar with the trail and already knew what to expect. But regardless of how much preparation you do, there will always be slips. I already knew that most of the trail is covered with spiky bushes but still I failed to bring guard sleeves for my legs that I ended up with few scratches. Again!

The price of confidence.

In a trekking group, people will always have different paces. Naturally, I walk on the faster side so I ended up on the head group together with the other younger trekkers and day trekkers who carried lesser weights. Since I was already familiar with the trail and was pretty confident with my tracking and navigation skills “that time”, I and the other people on the head group rocketed and headed the way. We managed to take the right path between several forks until on a certain section that looked like a dead end and nothing seemed familiar already. With no choice remaining, we ended up staying in the same spot for about 15 minutes until the rest of the group arrived. From that moment on, I swore to myself that I must not lead the way if I haven’t been on the same trail for at least 5 times already. 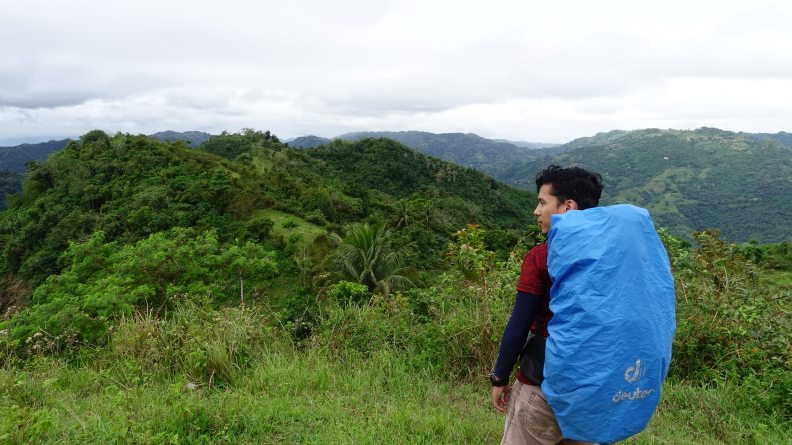 After several hours of knee cracking ascents, we finally reached the peak. I believe everybody was so hyped when we got a glimpse of the peak. When so much excitement and relief, our pace suddenly spurted. The peak was already occupied by few campers. There were at least three groups of campers, including ours, that day. It was fine since we never planned on pitching our tent on the peak itself due to several factors which I mentioned on my previous blog. So we went down and looked for a good flat spot where we pitched our tents. They day trekkers group stayed for a while and we had our group photo before they proceeded they descend.

As the night started unrolling its cold blanket, the skies started spewing droplets on the ground. We waited for several minutes before we were able to cook prepare our dinner. It was already dark when we had our dinner. The atmosphere was somehow misty, hinting a possible rain. There was a short period where the Gods allowed us to have our short “socials” part, which eventually was halted due to the sudden burst of rain somehow implicating that our “socials” time is already over. Everybody went inside their respective tents and called it a night. Alas! I wasn’t even able to bring with me even a single jacket. I was really cold that night that I thought I would die. So I just stayed inside my tent and good thing I had with me my sleeping bag which I rolled and tucked myself into.

The rain did not cease. I just slept inside my tent since I was dead tired due to my sleepless night prior the trek. It was then when few of my fellow campers started playing card games inside one of the tents. From the noise they were making, I can tell they were surely having a good time. On my side I was not, I was disappointed in fact. I was already sleeping like a dead log, when suddenly a jolt of scream/laughter spurts out waking the sh*t up of me from my slumber for a couple of times. It’s not about being a “kill joy” but the fact the everybody’s already inside their tents and called it a night, a camper must have at least the courtesy to minimize his/her voice as a sign of respect for those who are already asleep.

One thing that I dislike is when someone or something suddenly wakes me up. It’ll surely pull my trigger. 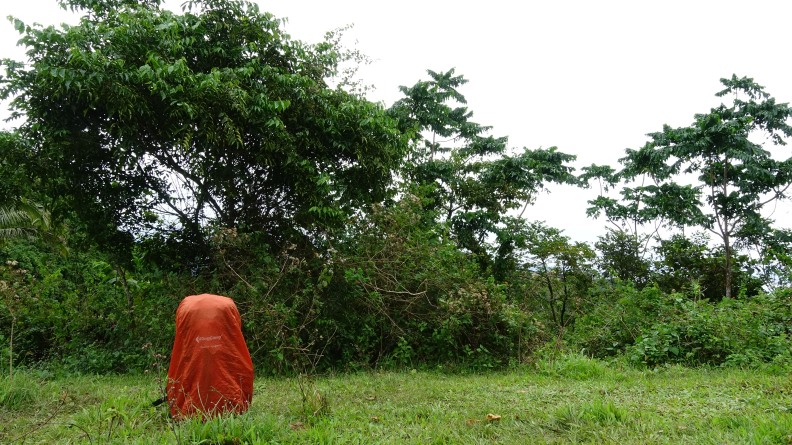 Cold morning came and thankfully the sun started paving its way. Due to my disappointment the night before, I decided to stay silent to those loud people just to show how non-affirmative I was on what they did last night. I stayed mum without dropping any clue just to make sure they’ll figure out themselves on what went wrong. Yes, I can be as serious and silent as hell if I want to, too opposite of the usual self I show. Preparing our breakfast came a breeze. After we had our breakfast, we then quickly broke our camp and started our descent. After several hours, I slowly broke my silence noticing that they already figured it out. I told them what went wrong and after that, everything was history. I am not the type of person that holds a grudge though.

As always, chibog every after trek! (feat. Unli-rice of Mang Inasal)

After hours of trek, we finally reached the main road where we rode a jeepney down to the main downtown area. Some of us went straight home while the majority decided to take our lunch on the nearby Mang Inasal. Why do we always choose Mang Inasal? It’s because of their unlimited rice for every meal. Trekking for several hours could really burn you out. What better way to replenish your energy than to carbo-load again? LOL. Anyway, after we got our bellies filled, we went to our individual home.

Overall the whole trek was fun and was indeed a good weekend exercise. It was indeed one of the camping experiences that I surely will not forget. You may have guessed it right, but yes it was because of what happened during the “socials night”. I guess there’s always a lesson to be learned or waiting to be learned in every situation and circumstances. Regardless, let’s continue learning and explore beyond the horizons of the world and of our understanding.

Check out my vlog during this trek.