Mount Pulag is located in Kabayan, Benguet. It is Luzon’s highest peak at 2,922 metres (9,587 ft) above sea level. Baguio, usually is the starting point of most climbers. It was September of 2014 when we climbed Mt. Pulag. This should have been just a side-trip for our Sagada itinerary, but eventually, in my opinion, this became the highlight of our whole trip.

From Cebu, we flew to Manila and arrived late at night. We immediately boarded a bus to Baguio then just slept on the bus just to save money from paying a night stay in Manila. It was around 6 in the morning when we arrived in Baguio. We then looked for a place to stay since our arranged trip to Mt. Pulag was scheduled on the morning after. Prior the trip, we booked an arranged Mt. Pulag tour since most of us were not yet experienced climbers and we don’t have the proper equipment yet to climb it on our own. To fill our days, we roamed around the city center of Baguio. Unsurprisingly, there are plenty of good jackets and coats available even on the side walks of the city. We bought some to add some layers to what we already brought for our camp.

Woke up by 3AM, we prepped ourselves and headed on to the nearby bus terminal where the tour staff met us. There were at most 15 of us on the tour. A quick briefing was conducted before the tour commenced. We rode, on what they call “monster jeep”, for hours before reaching the Ranger Station, which is the starting point of the trek. We made several stops for various personal necessity reasons.

Before reaching the Ranger Station, every visitor must drop by the local government environmental office for registration and quick lecture and orientation. Upon reaching the Ranger Station, we geared up, and did some stretching. Funny thing is that we were supposed to bring rain coats, but since we don’t have any, we managed to improvise using unused trash bags. There are porters on the village who are willing to carry your extra load for some price.

On the Ranger Station, another registration form must be filled again. We were told that we will take the Ambangeg trail since most of us does not have the sufficient climbing experience yet.

To the campsite we go!

Ambangeg trail is dubbed to be the “celebrity trail” because of its low-level of difficulty. Rumors did not fail. The trek was really easy. Though the distance was quite far, but the steepness could never be felt. The trails are already established. Thankfully, the weather cooperated with us. There were instances when the temperature on the mountain could really drop to the extent of causing frost bites and hypothermia. Always secure and wrap extra pair of dry clothes to protect them from getting wet and from the moisture. 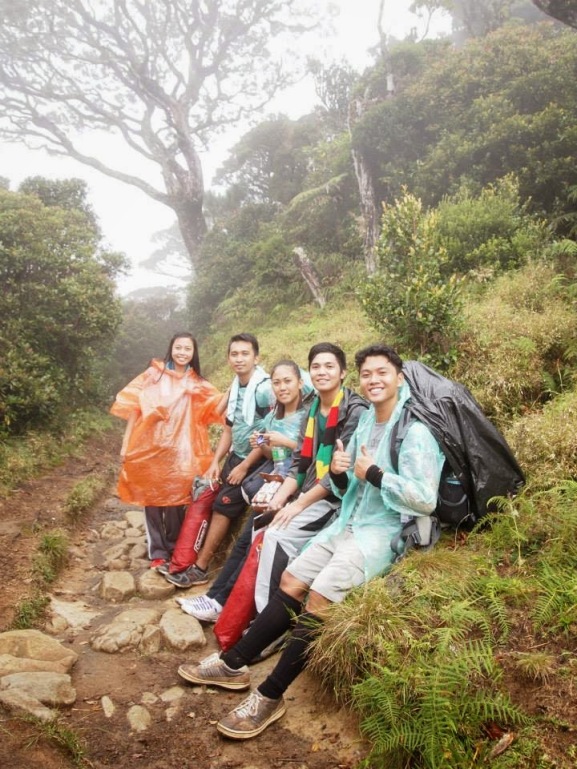 After hours of trekking, we reached the camp site. We then immediately set-up our tents and secured our things inside to protect them from getting wet from the moisture. The camp has two pit-latrines and a flowing fresh cold water. The camp gets colder and colder as the sunsets and the night progresses. I got out all my extra jackets, gloves, socks, beanies and wore them while I slept.

Get ready for the majestic view!

Wake-up call was early, at around 3 in the morning. Quick prep and ready to assault. The climb to summit would take about an hour depending on the pace of the climber. It was completely dark, and flashlight is a must. We reached the summit while it was still dark. It is quite normal to experience numbing and frost bites at the summit. You would really thank yourself if you bring a thermal blanket. Other climbers would also appreciate you if you’re willing to share whatever you have to fight the freezing air. We waited and endured the freezing wind for the majestic view of sun’s rising. As the sun rose, all the thoughts of exhaustion were vanished. The long treks and the freezing temperature is worth that moment and the scenic view of the sea of clouds. I was never been on that level of awe before.

Getting back to the campsite was a breeze. I enjoyed the scenic views that I had no idea we passed, since it was still completely dark when assaulted to the summit. With the sun’s soft kiss accentuating the details of the mountains, and the haze effect of the clouds, it was as though a scene that can only be seen in the movies. As we reached our camp, we had our breakfast and head on back to the Ranger Station.

Getting back with several side-trips.

There were several side-trip included in our tour. Included are the old JangJang hanging bridge, Ambuklao Dam and the Sulfuric Hot Mud.

We arrived back to Baguio late in the afternoon. Another problem we had again was the place to stay. Luckily, one of our co-climbers tipped us of a cheap place named Calalily Pension House. It is located just a walk away from SM Baguio. We then immediately called the place and haggled the price. It was non-peak season, so we got the place for a cheaper rate. As we reached the said place, we then cleaned ourselves, prepared our things, and rested for our early Sagada trip the next morning.

If given the chance, I would climb Mt. Pulag again but on Akiki trail. It is said that Akiki is way more different and more challenging than the Ambangeg trail. Unfortunately, I heard news that Mt. Pulag is already overly crowded by tourists. Hopefully, when I get back there, there will only be at most 15 people on the summit, just like what I experienced way back 2014.