It all started with my friend informally inviting us to his trip. Actually, I am not yet sure if he was damn serious or was just kidding when he invited us to go with him on his Zamboanga trip. But then a green flag waved on one of the cheap airlines in the Philippines, Cebu Pacific. AIRFARE SALE! If not for that, I don’t think this trip could have happened. Everything else went serious later. Well, my friend is a man of meticulous planning. He was the one who did the itinerary and ironed out almost everything. But one thing is for sure, we will be staying and visiting his hometown for the first leg of our trip. I forgot to mention, I am referring to my friend James of AsaNasadSiJames.

The day arrived when or trip finally commenced. We landed in Ozamiz City where we were then picked up by James’ family. We stopped over at several stops before heading straight to their hometown.

We were welcomed by his family at one of the cold springs in Mahayag, Zamboanga del Sur. They were so welcoming and accommodating. Foods were already prepared with a whole lechon. Yay! This is fiesta!!!

The spring is already slightly developed. Concrete structures are already present. I swear I was hesitant to dip in the waters. It was so cold and cold is my mortal enemy, I must say. But what else can I do? I was pulled by the water and my curiosity. The first dip was so freaking cold but my body eventually adjusted to the temperature. It rained when we were about to leave. Gladly, I was able to withstand the cold regardless of me shivering at the back of their pick-up car for the entire trip. We traveled from Mahayag to Dumingag where they live.

We spent the night at their residence and managed to roam around their town by night. Their town observes curfew hours by the tick of 10 PM. The roads were already silent even as early as 7 PM. No other way to get around aside from the roving tricycles or by driving your own motorcycle. It was my first time driving a scooter and it was a hell of an experience, I tell you. It was so dark and my vision was as hazy as fcuk, I almost fell in the canal right in front of their gate. But the experience was so memorable. Oh! It was also my first time eating balut.

Early in the morning, we had our breakfast courtesy of Adalim family. We bid farewell as we headed straight to our next legs of our trip. Good thing we don’t have to hustle for our transportation anymore. James’ uncle volunteered to drive us straight to Tampilisan, Zamboanga del Norte where we will be spending our night. 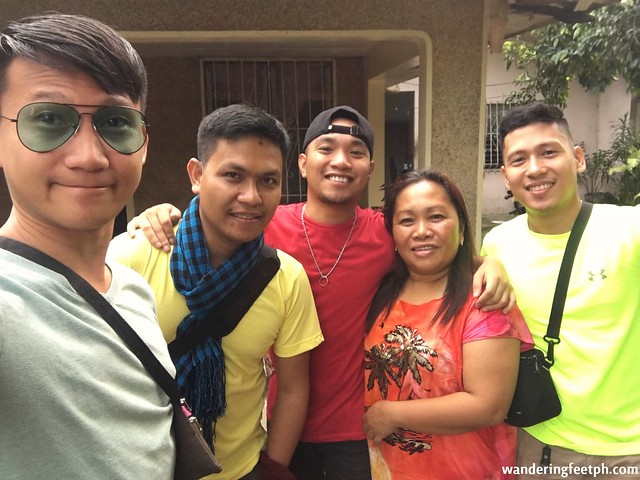 While on our way, we stopped over at Pagadian City just to experience riding their quirky tricycles and of course see Pulacan Waterfall just right beside the main highway.

Just when we arrived at Tampilisan proper, habal-habal drivers quickly swarmed us asking for our destination. We haggled for them to take us straight to Situbo Waterfall.

We could have hit another waterfall at the neighboring municipality, but time and weather did not allow us. It was already too late in the afternoon and it rained so hard. What we did was, we got our drivers’ numbers and arranged with them our visit to the other waterfall the following day.

Early in the morning, at around 5 AM, we met with our drivers and took off to our destination which was Tagbilat Waterfalls in Titay, Zamboanga Sibugay. We did not care to take a dip anymore as we were racing with time.

From Tampilisan, we took a bus for Ipil, which only passes around every hour. At Ipil, we took a van heading to Zamboanga City. Around 2 hours, we disembarked at Vitali where we started our habal-habal ride towards Merloquet Waterfalls.

We managed to stay long at the waterfall and even able to enjoy the water. An hour passed, we went back to the main highway to catch a trip to Zamboanga City. Luckily, a van passed by heading to the city. The ride towards the city took around an hour. Another luck, we don’t have to pay for our accommodation anymore as one of our friends has a relative living in the city and offers a room for us to stay. We ended up our day strolling around the city and trying out their foods.

We started our day early and went out the streets to hunt for their known chicken satti. After chowing down our breakfast, we went straight to Paseo del Mar where we booked a trip to Sta. Cruz Island. They take passengers as early as 7 AM. We brought our own food and water as there’s no restaurant on the island. Though there are locals occasionally offering fresh seafood to the visitors for a reasonably cheap price.

Sta. Cruz island is famous for its pink beach. Well actually, it would still be a normal white beach if not for its red powdered corals mixed with its sands. It was gloomy that day but still, the beach was visibly pink. Behind the facade of the island is a marine sanctuary. We toured around the sanctuary and could have stayed longer if not for the unexpected heavy rain. Our trip was shortened. We got back on the main Zamboanga island before noon. We just changed at the public restrooms and continued or Zamboanga City tour instead.

The rest of the day was spent roaming around the city and checked out some of their culturally rich spots.

Our day started with a quick courtesy call at the province’s mayor’s office and registration.

Then we started our tour by visiting Bulingan Falls which is just 20 minutes away from the city hall of Lamitan.

Then we were then toured on their public market where we witnessed the diverse culture on the island.

We bought several delicacies with us before heading to Isabela City where we will be picked up by their tourism personnel. It was already noon when we arrived in Isabela. We then started our island hopping tour.

Early afternoon at around 3 PM, we headed back to Zamboanga City and had another little stroll around the city. We went home early to prepare our things for our early flight the next morning.

One Reply to “Ultimate Zamboanga Trip”