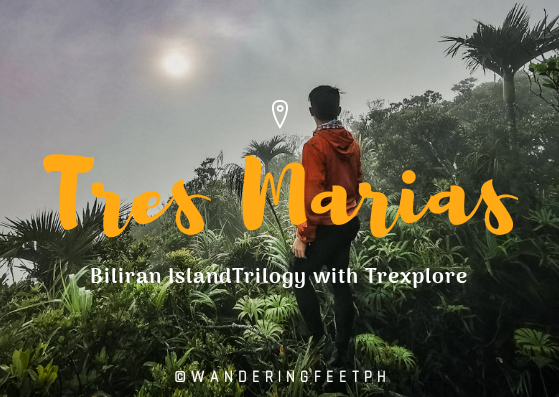 Elevated at around 1,330 MASL (est), Naliwatan peak stands the tallest among the three peaks of Tres Marias in Biliran island. It is also the most visited among the three and, I must say, has the most established trail. The mountain surely is blanketed with mysteries and wonders which drives mountaineers to gain the will to visit the mountain. I, myself, had the taste of the spectacles of this mountain way back 2017, and it planted a goal in my head to revisit it. I was able to revisit the mountain late 2019, two years later. This time I was able to summit all three peaks thus stamping the mountain on my list as “Completed!“.

You can read my blog about my first Tres Marias experience here.

So far, spending almost two days traversing the peaks of the mountain did not lessen my eagerness nor burned me up. Instead, it further hyped my spirit to complete all three peaks. The progress we made was already a feat, now that we’re approaching the last peak. We really made it.

We resumed our trek after we had our quick rest at the river which also serves as the boundary towards the third peak of Tres Marias. Since we were ahead of our plotted schedule, we decided to just take it lightly so to not exhaust our bodies.

Heading to the next campsite was a bit easier. Not only because our bags got lighter, since we already ate some of our packed foods, but also because the trail is quite forgiving. There were lesser slopes and mostly flat surfaces. This is because we are starting on higher elevation, unlike the first day when we still have to climb those steep slopes.

The vegation is dense. We passed through ginormous trees. Some even form like gates or portals we have to pass through. The voice of nature was so evident from the buzz of the insects to the squeaks of the birds. We even heard squeals of wild monkeys. While our feet were marching, our eyes were also wandering through the branches of the trees down to the muddy corners of the trail, hoping to see and spot exotic birds and animals. And yes! We spotted some.

After an hour, we finally arrived at a place that seems very familiar to my eyes. We finally arrived at the campsite. Then a nostalgic vision of the camp we had 2 years ago suddenly rushed to my head. I still clearly remembered the area where I pitched my tent and the positioning of the rest of our tents. Ahh memories.

We then surveyed the area and looked for a ideal space to pitch our tents. Hammocks are more suitable at the campsite as rocks and tree roots protrude from the ground making it challenging to pitch tents. There are some select flat areas where average sized tents can be fit. Since we arrived early, we were able to position tents on areas where we can have a comfortable rest.

After we had our camp positioned, we then took the chance to refill our water bottles from the watersource before it gets late and dark. The watersource is located just few meters down from the camp site. I then grabbed the opportunity to clean myself by taking a quick dip and shower at the river a few meters away and below the stream where we get our water. I swear, it was one of the coldest shower I had but a satisfying one after two straight days with no shower.

Night at the campsite

The cold shower relaxed my body and pulled my eyes down. I was able to have a quick sleep before the skies darkened. As the night was approaching, mist slowly covered the forest. Everybody was then busy preparing for our early dinner. While waiting for our food to be cooked, everybody was sharing their personal experiences, stories, and know-hows. Moments after, dinner was served.

The food and the several good laughs we shared, warmed the rest of the night. It was still early but we already called it a night. We deserve a long sleep for the early morning summit the following day.

4 AM. Wake-up call. The coldness in the air made it hard for me to get up from my sleep, but I need to. I quickly changed to my telling outfit and grabbed my headlamp. The coldness was tripled the moment I stepped out from my tent. I did not bother wearing a jacket, knowing that my body will be pumped and warmed by the moment we start ascending towards the summit. During the ascent, the damp air somehow minimized the exhaustion I felt.

Darkness covered the entire trail, with only our lamps as our light source, giving us an extra challenge. The misty air diffused the light coming from our flashlights and headlamps producing soft beams towards the surrounding.

As we progressed, slowly the morning light leaked through the sky drawing details to the trees. Soft morning glow enveloped the branches and the leaves. It was then we noticed we were already at the mossy part of the trail. Everything was all so familiar. It was just the same as my first summit at the same peak except for the gloomy sky. After more than an hour, we finally arrived at the summit.

The covetousness of the clouds hindered us from seeing the raw sun. Nonetheless, it was still an achievement and a feat to be able to summit all three peaks of Biliran’s Tres Marias.

Three days, three peaks, and yet we were not given the chance to have even a window of time to experience a clearing at least at one of the peaks. Though it was truly an overall satisfying experience, but still there was a still an empty corner in my soul waiting to be fulfilled. Not expecting much, we did not spend too much time at the Naliwatan peak. We started our descent early so that we may still have plenty of time for our next adventure. Then something unexpected happened.

Just covered a few meters on our way down, Tres Marias somehow gave us a parting gift. Maybe a recognition gift or the mountain’s way of saying “thank you” for dedicating our time visiting all its three peaks. No it was not a clearing at the top, but for me, it was more.

Right in front of my two eyes was a well framed picturesque view of the other two peaks swathed by the fog. It was a momentous sight that I could not hold myself but to scream in awe.

It was too beautiful not to be shared with the rest of the team. They too were delighted by what they saw. One photo was not enough for me that I stayed there for more than a minute to capture every possible angle and to fill my eyes with food for my soul.

Down for another adventure

Upon our arrival back to the camp, everybody was then in the move to prepare for the breakfast. Breakfast was quick and we then packed our bags and got ourselves ready for the final descent and on to our next extreme adventure.

While we were on the trail, Sir Gian and Joni were already teasing us on what we were about to do right after we descended the mountain. Wild imagination of extreme adventure played throughout my brain the entire trek. I couldn’t help myself but to feel thrilled. I did not know what to anticipate and I can’t wait to finally get to our next adventure which will be posted next on my blog. Stay tuned!

Special thanks to Sir Joni Bonifacio

Sir Joni Bonifacio is a cave master and an extreme adventurer in Samar. He is one of the few people with the drive to explore and promote the natural attractions locally. Sir Joni Bonifacio is a man of adventure with a vision. His aim to promote the local tourism and his effort to achieve this is beyond compare. My sincere thanks to Sir Joni for handling my long awaited opportunity to summit the three peaks of Tres Marias.

If you want to experience the same,

I highly recommend you contact Sir Joni Bonifacio. Here’s how and why: