All of us may have experienced that time when you do not notice the time passing by so fast because you’ve been talking and laughing good with each other. That’s what I experienced during our last traverse from Osmeña Peak to Kawasan Falls. Osmeña Peak is located in Mantalungon-Dalaguete while Kawasan Falls is in Badian, which is at the opposite side of Cebu island.

It was actually my first time traversing from Osmeña Peak to Kawasan Falls, on foot. I had it on my bucket list for a very long time, now I can totally crash it out. The decision to traverse was actually spontaneous so was our camping at the Osmeña Peak. The original itinerary should have only included Mt. Takli-ad and Mt. Lantoy in Argao, Cebu, but due to some reasons narrated on my “Osmeña Peak post“, the trip was extended for 2 more days.

We stayed overnight at the camping area of Osmeña Peak. The morning after, we broke our camp and had our quick breakfast before we started our hike to Kawasan Falls at exactly 7:20am. There are locals at the camping area, especially kids, that will offer to be your guide on your traverse. We chose not to have one since Sir Wandering Soul Scamper is with us and he already knows the roads and the trail which, by the way, is already well established.

The hike traverse is estimated to be around 4-6 hours depending on your pace. This can already be expected since you’ll be crossing the Cebu island from one side to the other. At the earlier part of the hike, you’ll pass several “barangay” and local communities. Do not forget to be polite to locals as you pass by their villages. There are also “sari-sari” stores where you can fill yourself with cold drinks and re-fill your hydration containers before proceeding the very long hike.

The weather was good when we started our traverse. The sun was out, at the same time, the clouds were there to modulate the sun’s heat. It was not gloomy nor was it too hot. We started our hike good and our pace fast. We saw the different sides and the mountain ridges of Mantalungon-Dalaguete on a different perspective.It rained days before, so the trail was still a bit muddy and slippery. There were few slips but thankfully no injury was inflicted within the group. We passed through several concrete roads. There were also rough roads, but most of the hike was by the foot trails. There is a natural water source on the trail. You’ll pass it after about 2 hours of hike. The water is said to be potable, but it depends on your gut’s sensitivity.

As our hike progressed, so did our stamina started to deplete. Don’t get me wrong, the trail was indeed well established, but that does not mean it’s relieved from the ever-changing heights. Before our legs and feet started to scream, what better way to do than to divert our attention to other things. This is the part where your brain has to keep on brewing topics and ideas just to keep you mouth busy as to divert the attention. We just kept on talking, kidding, laughing, and occasionally singing as we gained distance foot by foot towards our destination. We were talking a lot that we got on to different topics, which I cannot remember anymore. Without knowing, it was already an hour or two passed and we were already nearing to our destination. We stopped over at the only natural water source along the trail just to re-freshen up. Another hours passed and without noticing, we were already few meters away from Kawasan waterfalls. We made it within around 4 hours of assault hike.

We arrived at the 3rd level of the waterfall and rented a small cottage where we left our bags. We’ve been camping for 2 days so we took a dip to wash away the dirt and stink from our sweaty bodies. There were plenty of tourists at the vicinity, some came from their canyoning activity, others just went there to enjoy the water. There’s a monkey swing and cliff-jumping at the vicinity. Of course, it was adventure that we came for, then extreme adventure we’ll go for! We did not miss the opportunity to try the monkey swing and the cliff jumping.

Moments later, we felt hungry. I almost forgot we haven’t had our lunch yet. We decided to wrap it up and descended our way to the highway where we had our very late lunch at the nearby restaurant just across the road. The whole meal was Sir Wandering Soul Scamper’s treat. Yahoo! After we had our meal, we felt tired and that’s when the feeling of soreness on our legs, calves, and feet kicked-in. Luckily, there came a bus right when we left the restaurant. We took the bus bound back to the city. We rested and slept on the bus as we waited for several hours before arriving at the city. 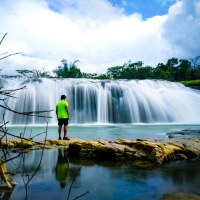