There are things we just neglect on our first encounter and too late to realize its glitter. That’s our tale of the newly crazed peak in Cebu, Casino Peak. Casino Peak or more appropriately addressed as “Ka-Seno” peak, is located on the same mountain range where the highest peak of Cebu, Osmeña Peak, sits. Contrary to popular belief, Casino Peak was not named so because the locals or people of the olden times used to play gambling games at the peak’s area. According to the locals we encountered on the area, the peak is called “Ka-Seno” because the peak belongs to the land owned by a man named “Seno“, thus the name “Ka-Seno” which translates from Bisaya as “owned by Seno“.

I believe the name “Casino” is quite misguiding and “Ka-Seno” would be more appropriate. But since the word “Casino” might ring an intriguing bell on people’s ears, then most of us just stick with it.

I remember during my first Osmeña Peak overnight camp, we traversed straight to Kawasan Waterfall in Badian the next day. Our minds were already set for Kawasan and we were already eager to reach the waterfall to have our cold dip. While we were trekking, a local man called us suggesting us to climb a certain peak alongside the trail. Urging us to climb the peak as the view at the top is rewarding as he said. 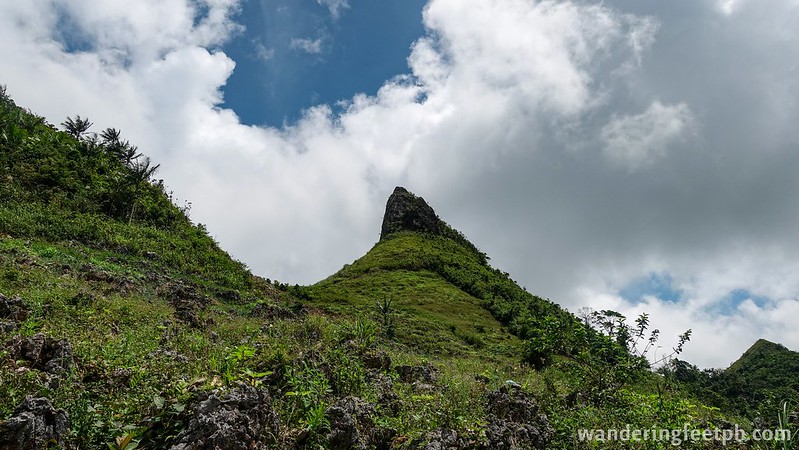 We did not bother as our minds were already set to reach the waterfall. Traversing from Osmeña Peak to Kawasan Waterfall requires at least 3-4 hours of walking and we don’t want to be behind our time. And so we moved on ignoring the local man’s suggestion. Never did we know that the peak he wanted us to climb would now be the popularly known as “Casino Peak”. The peak which we, later on, decided to climb for our Southern Cebu Peaks Quest.

It was at the end part of May when we embarked on a Mountain Peaks Quest in the southern part of Cebu. The event was made to serve as our pre-climb for our upcoming major climb in Tres Marias in Biliran. We planned to hit multiple peaks in one itinerary. Where better place to be than the mountain ranges of Southern Cebu? Casino Peak sits right next to Osmeña Peak, alongside the trail if you happened to be traversing to Kawasan Falls.

The trail to Casino Peak

Starting off from Mantalungon Public Market, we trekked our way through the same trail heading to Osmeña Peak. Before reaching the foot of Osmeña Peak, there’s a junction where the other road leads to Casino Peak. It was already mid morning when we arrived at the junction. There are paved portions on the road leading to Casino Peak making it easily accessible with motorcycles. Along the trail, we passed by several interesting rock monoliths. I myself did not miss the chance to have a photo of myself climbing one of the rocks.

Moving on, we continued our trek. As usual, jokes, stories and different kind of conversations do not disappear. I believe it is essential in some way as it diverts our attention from the tiring walks and the excruciating heat of the sun especially when the road to Casino Peak is mostly open with fewer tree shades. To top that, there are multiple uphill and downhill sections of the road. I suggest if you are the type of person who gets dehydrated easily, you better bring plenty of water.

After more or less an hour, we finally arrived at the foot of the peak. 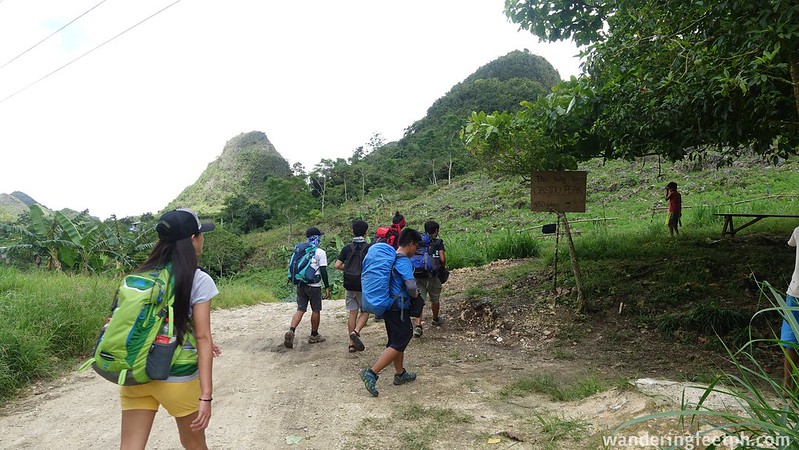 There we rested for a while under the tree shades, where the locals were also socializing, before we proceed with the assault. 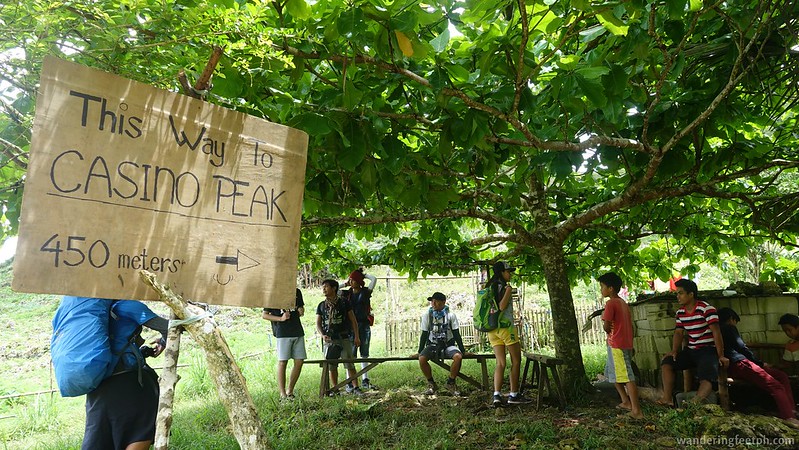 When we have set our mind for the assault, we headed straight on the open trail going up to the peak. 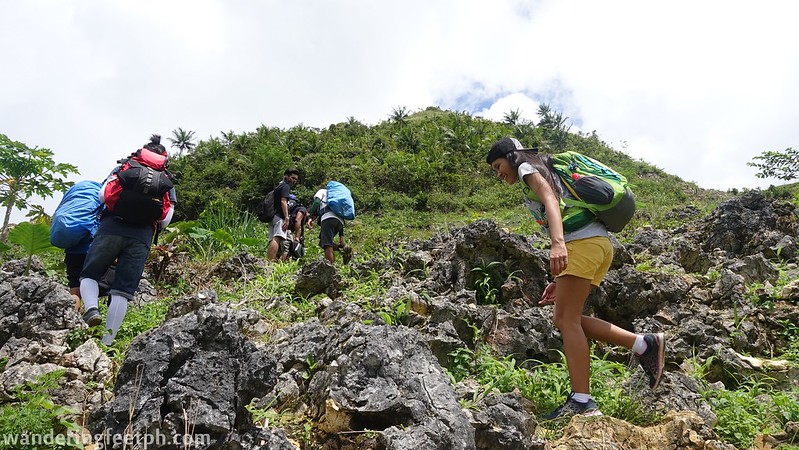 It was indeed an intense assault. The sun has started to peak and the heat slowly biting its way to our skin. What made it even worse was that there was no hint of wind making our skins spew more sweat, exposing us to dehydration. The angle of elevation was another factor. But at the end, the reward at the top was all worth it.

I was dumbfounded by the view I saw at the top. It was surreal! 360-degree view of the mountain range put me in awe. The pointy green hills somehow mimic the Chocolate Hills of Bohol. What made the view even more glorious were the clouds forming and licking at the hills. Ethereal as I describe it. 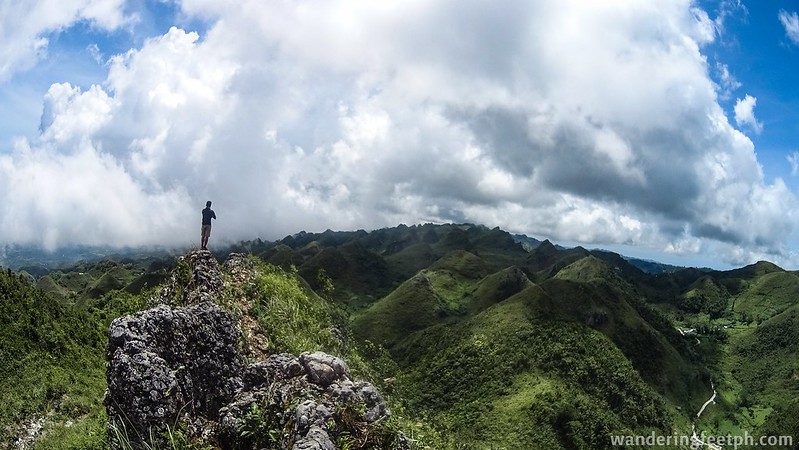 It looked like heaven as I personally see it. I remember that local man who urged us to climb the peak the first time we passed the trail. He was not wrong at all. Indeed, the view at the top was great. The heat of the sun did not even stop us from staying even longer at the peak. We enjoyed the view so much that we took several photos we did not mind counting. The only thing that triggered us to descend was time. We were getting behind our schedule and so we have to bid farewell to the peak as we still have other peaks to accomplish for our quest. 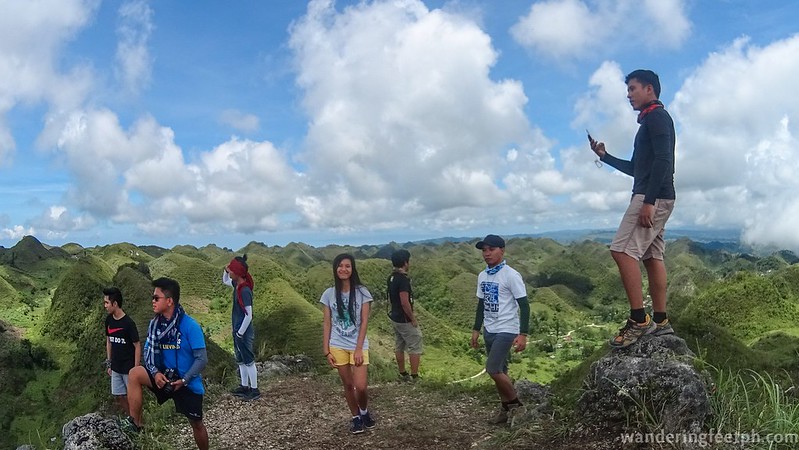 There were no rules and regulations when we climb the peak. Anything can be brought at the top. But as a responsible visitor, let us help in maintaining the cleanliness and preservation of the beauty of the peak. It is so sad to see camp fire debris, plastic trash, and glass bottles being left at the top. I have no idea if those are from the locals or from other visitors. Regardless, as visitors, we should educate ourselves and practice LNT (Leave No Trace) principle. Even just in the smallest ways, we can contribute to the wellness of our mother nature.