Kandungaw Peak, from the Bisaya word “dungaw” which means “to look below”, literally stands by its name. With its 90-degree death drop cliff, it surely requires one to have a bold heart to take a pose by the tip of its cliff. Sitting just within the same mountain range, Kandungaw Peak can be reached just minutes away from Osmeña Peak’s foot via habal-habal. Just this late May, I was able to visit the famous peak as it was part of our Southern Cebu Peaks Quest which served as our pre-climb for our Tres Marias major climb by early June.

Fresh from our Casino and Osmeña Peak jaunt, we refueled our bodies at the Mantalungon Public Market where we took our quick lunch. Time was ticking and so we quickly bought our essential needs before we proceed to our Kandungaw leg of the quest. For practicality, we just bought already cooked foods for our dinner as we might arrive at the peak late and too tired to cook. For our breakfast, we bought those that can be cooked fast and easy. It was already late in the afternoon when we departed from Mantalungon Public Market for Kandungaw Peak. Initially, we planned to have our sunset viewing at the peak, but unfortunately, time wasn’t our friend and so was the weather. The clouds started to get moody and drizzled from time to time and rain is looming just around the corner. We were in a hurry so as our habal-habal drivers as they too didn’t want to be soaking wet. 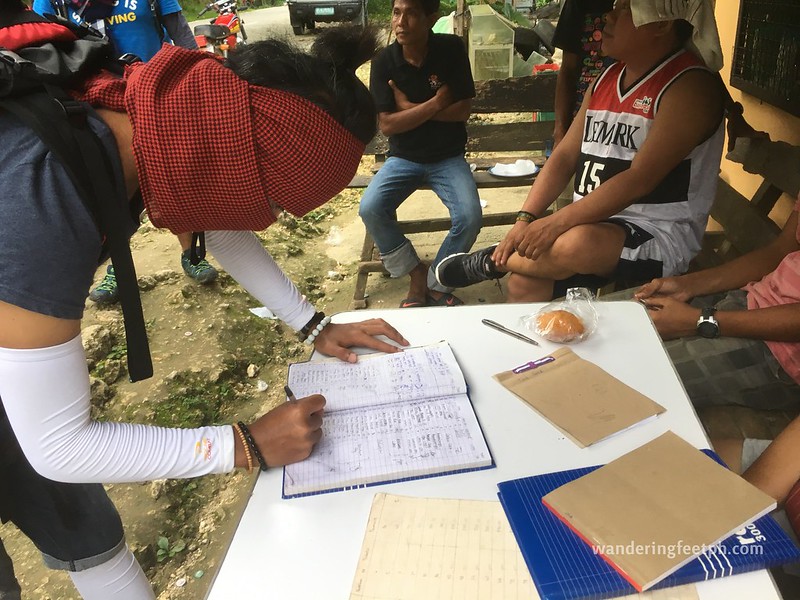 No time to waste or else we’ll be trekking in the dark and possibly be soaking wet as the sky was hinting a bad mood. We hurriedly signed the visitors’ log at the foot and paid some fees.

Yes! Absolutely breathtaking. That was my first impression when I saw the peak, for the first time, from afar while I was still sitting steadily at the back of the habal-habal motorcycle. The local tourism at the place requires visitors to have at least one local guide to guide the visitors through the trail. 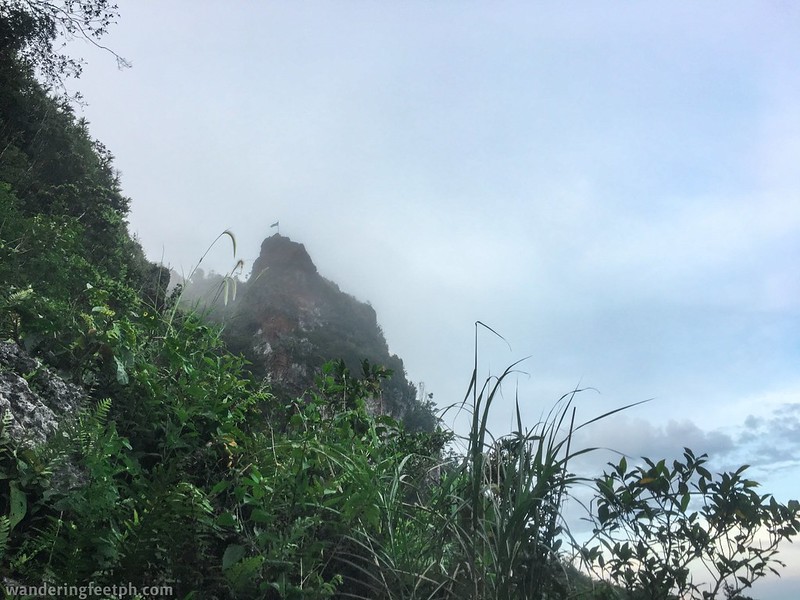 Literally breathtaking! We had several stops to catch our breath during our assault to the peak. The trail and the angle of elevation can really test one’s limits and capabilities. Also, no need to mention the cardio stamina. I feel like my lungs were about to blow up and my legs went jello. We were in a fast-paced assault though. Maybe that can be a valid excuse as to why I felt that way. As we were approaching the top, I can feel the cold air thinly creeping through my bones. The vision of the cliff, made hazy by the fog, even made my senses worse and intensified the coldness I felt.

Why was it named Kandungaw?

Of course, the whole trek wasn’t silent. There will always be those random conversations. But what really made a mark in my head was the history behind the famous peak we were about to set foot on. According to our guide, Kandungaw Peak was named so because it literally was made as a hideout by the Filipinos from the Japanese militaries during the Japanese era. The famous peak serves as their look-out for any coming enemy. That’s where they look down below or “dungaw” in Cebuano dialect. A cave nearby the peak is where they hide whenever they spotted one. As I was looking at the peak, I was dwarfed by how colossal it was. The thought of falling from the peak made my knees tremble and weak.

As we reached the top, we headed straight to the camping area. It took us around an hour to arrive. We did not bother setting foot at the famous peak because it was already dark and we need to pitch our tents. Leave the peak for tomorrow when the sun comes out so that we can have a better view and a good picture. With no time to waste, we then scouted the camping area surveying the best spots to pitch our tents. 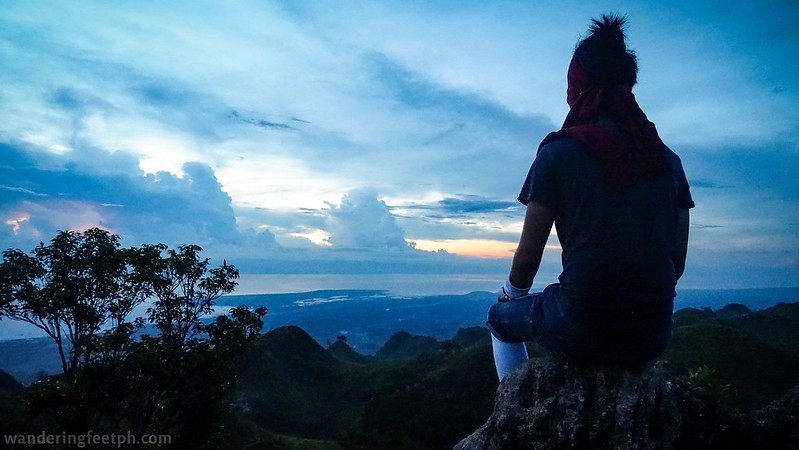 Unfortunately, the new camping site is not that wide. The area can only accommodate at most 6 tents. That is why resorted into tent sharing. Also, the new camping area is somehow rocky thus making it hard to use tent pegs. I suggest you bring sleeping bags or ground mats for comfort.

Good thing though, the locals erected a toilet room nearby. Do not expect much as it is just a simple concrete room with a single manual toilet bowl inside. Our guide did provide us one gallon of water for flushing. But if you want the natural way, you can still go into the bushes and do the old cat-hole thing which I personally prefer. But keep in mind the LNT principle.

Paint the sky with stars

It was still early, around 6 PM, but the sky was already dark as if it were already midnight. We ate our already cooked food for our dinner under the dying lights of our headlamps and flashlights. Any meal can taste good if shared with the people you care about and well of course when you are dead hungry. I must say it was a sumptuous one. Dinner was done and some us went ahead to get a rest. Meanwhile, those that still have the fuel went on for socializing. We talked, joked, laughed, and played several word plays and games. It was a booze-less night. A miracle! We even had our mini-marshmallow by fire. Since we do not encourage campfires, we used our butane burners for the fire. It wasn’t as what we imagined but it was fun. 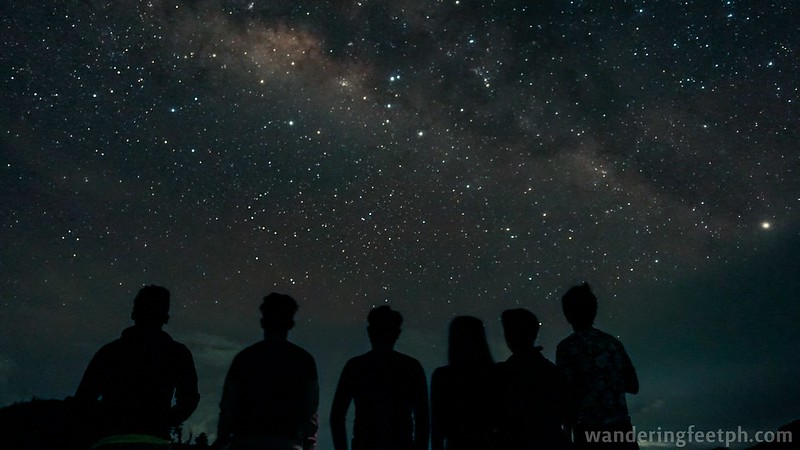 The clouds then started displaying its electrifying spectacles and started roaring. We thought it was going to rain and so we prepared to call it a night. But then fate answered our prayers. The sky cleared out like a stage curtain. The spotlight of the moon was not on the show. What appeared in front of us totally enthralled my eyes and captured my soul. Milky Way! This is what I’ve been waiting for. The moment to finally get a decent shot of this rarely seen sight. I did more than several shots. Patiently snapping from angle to angle. 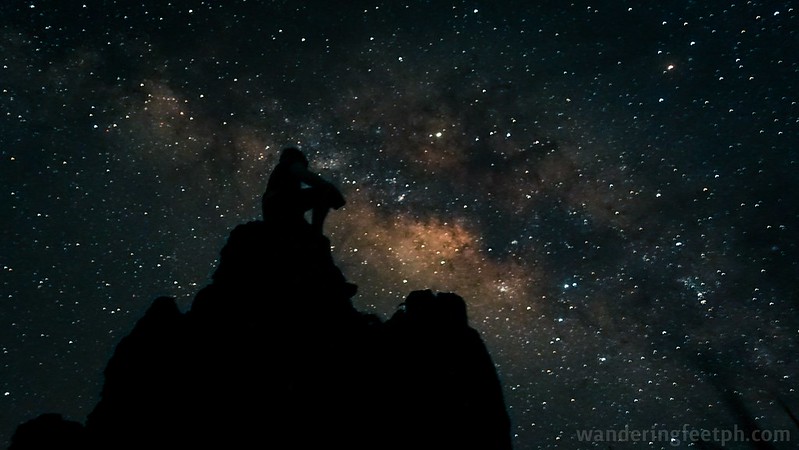 The mountain danced with my heart as the fireflies started showing up. Ugh! This must be Christmas! I savored the night as I basked in the light of the billion stars. I felt at peace. The show ended with the grand finale of the sky closing the stage and showered its water confetti, signaling us to finally catch our sleep.

Blissful morning at the peak

In the middle of the snoring sounds penetrated the bells of our phone alarms. It’s already early in the morning and time to wake up and greet the sun’s rising. Unfortunately, it was foggy. No clearing for the sunrise view. On the brighter side, the view at the top was still remarkable. The effects of the clouds add drama to every photo we took. 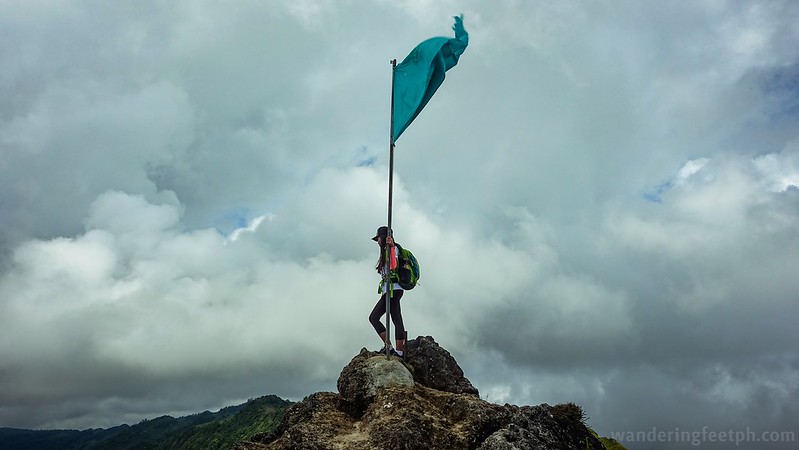 Moving on, we just prepared our breakfast while the fog and mist are still there to mantle us from the sudden kiss of the sun. We hurriedly took our breakfast and broke our camp. The sun’s heat was already penetrating when we departed from the camping area. Few early visitors were already at the peak.

Of course, we cannot miss taking photos at the signature death drop cliff of Kandungaw Peak. Perfectly, the sky gave us moments of clearing. One by one we posed at the monumental cliff. Personally, I was trembling when it was my turn. Yes, I love adventures and those adrenaline rush things, but I do still value my life. I cannot afford to be careless and pay the consequences. I had my friends take my photo while I was at it. While I was at the tip of the peak, it cannot be helped, but the vertical view seems to have sucked the soul out of me. It’ll only take one single careless slip to meet your demise. 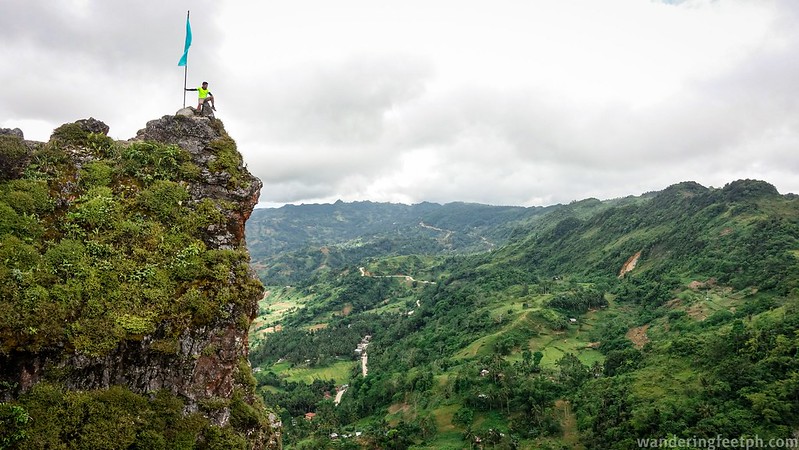 I swore I tightened my grip on the pole on every rock I can hold. Regardless, the view from the top was more than a reward. I stayed for a while at the tip until I got used to it. Fear slowly fading and I got to take several photos at the peak.

The descend and the side trips

Approaching midday and avoiding the noon heat, we hurriedly descended at the foot of the peak. We rested for a while before we proceed on to our side trip destination. At the foot were habal-habal motorcycles waiting for passengers. We took the habal-habal motorcycles to get us back to Mantalungon Public Market but with a quick side trip at the nearby rice terraces. Few meters away from the foot of Kandungaw Peak is a scenic rice terrace. We spotted the place when we were still heading to Kandungaw Peak. We stopped for a while and took several photos before heading straight to the public market. It was already mid noon when we arrived at the market. We took our lunch at the market before heading back to Dalaguete and straight back to the City. 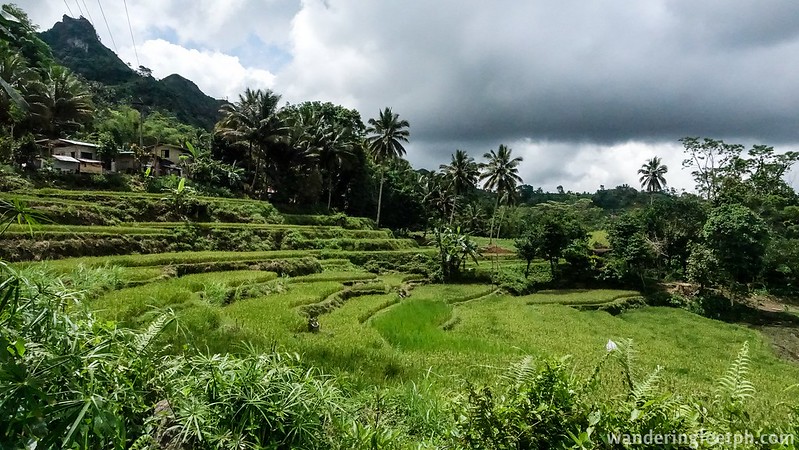 Early afternoon and we were already in Dalaguete waiting for a bus back to the City. Luckily, we did not wait that long before we were able to get on a bus. As we seated comfortably on the bus, some of us dozed off while I was looking at the photos I took and remembering the moments associated with them. It was a great quest indeed. Another weekend well spent. I then realized that no matter how good the photo you captured, but it’ll never be as good as the memories behind it.

My message for Kandungaw Peak

As I have personally seen, plastic trash and empty bottles are evident on the trail and in the camping area. I have no idea if those are from the locals or from the visitors or both. But hopefully, as visitors, we can contribute to the preservation and cleanliness of the mountain. Let us all observe LNT (Leave No Trace) principle. Not just in Kandungaw Peak but also in anywhere we go.