The cold morning mist starts rolling out, leaving dews on the leaves. It was a cold morning in Mt. Tres Marias. I woke up with my jacket on while struggling to find my glasses. I heard the clanking sounds from the spot where we cooked our meals. As I went out from my small tent, the cold breeze of the mountain caressed my skin giving me a slight shiver while I greeted everyone a good morning. Only a few were already awake while the others were still drifting on their own dreamland. Started our day early, we cooked our breakfast so we can fuel our fresh-from-slumber bodies. One by one, the rest started rolling out from their tents finding victories from their battle with sleep. Everybody was groggy from the exhausting trek of yesterday’s ascend.

The skies haven’t cleared out yet, we started our journey towards the portal to the enchantress’ sanctuary. I was excited for I did not know what to see and what awaits us at the summit. My mind started to condition my body for the final assault. I wonder where these wandering feet of mine will take me again. What mystics I will be witnessing and what memories I will be imprinting? 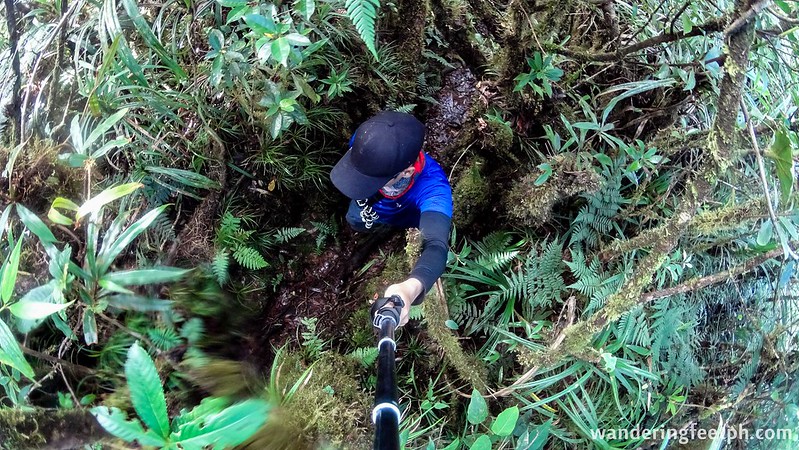 With our guide leading the way, we followed the narrow trail. The trail started off with the usual bushes under the tall trees. Nothing to see except for the damp and slippery trail that gradually increases in steepness. Step by step elevation rises as we were chasing our breaths.

The trail transcended from one form to another. As the forest became thicker, the surrounding trees were now bigger. From the damp trail sprouted like veins were the huge roots of the trees serving as our slippery obstacle and at the same time as our helper to clinch on.

Mosses started to appear from the ground up to the tree branches. I knew the air was colder but it all became negligible as my heartbeat was racing. The constant assault along with the obstacles and the slippery trail made me pant for air. Slip and slides, of course, were present during our assault but we just laughed it out.

As the sun started breaking out from the thick clouds, the forest suddenly transformed into an ethereal realm. It felt like I was in an elvish village like the ones we see in the film “The Lord of the Rings”. 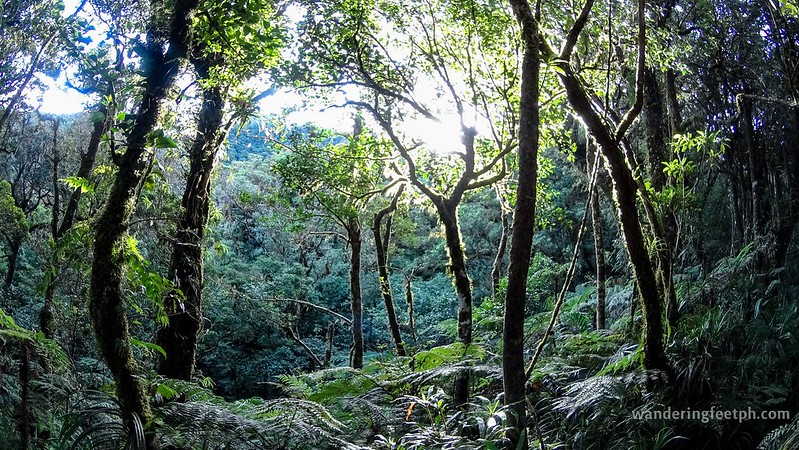 The sun rays penetrated deep down the mossy forest creating golden linings along the trees. Everything was surreal and I was in awe. Not long after, the muddy trail was then replaced by dried leaves, huge roots, ground moss, and dead tree branches. Exotic plants were present like the pitcher plant and others I rarely see. The assault was quite exhausting, but I, ironically, enjoyed it as I was exhilarated of what I saw.

Standing at the highest peak of Biliran.

Few meters away, I can already hear the ecstatic voices of the rest of the gang. I thought we still have plenty of distance to cover, but to my surprise, the guide revealed that we’re already at the peak of the mountain. The sky did not give us a favor as we were not blessed with a constant clearing. Though time to time, the clouds give us window moments where we can see the neighboring peaks. Of course, we cannot miss the moment to take a photo at the highest peak of Biliran. It also happened that it was the day to commemorate the annual celebration of Philippine’s Independence Day. We already had it all planned out. We brought an unofficial Philippine flag with us at the peak. Stroke a pose, waved the flag and took a picture with it.

We only spent at most 20 minutes at the peak, then we descended back to our campsite. The descent was way faster than the ascent, which is the usual case. But never underestimate a mountain or a trail. Precaution and safety must always be observed. We had our toll when we carelessly descended on the slippery part of the trail. One of us (Angel) had a wrong footing that made her slip and hard landed flat on the trail. Good thing no major injury happened and she said she’s okay. I believe it really hurt badly since it took her a while to stand back up and she’s still complaining of pain while we were on our way back to the camping site. Anyway, we just laughed at it and she even made a joke out from it.

The road back to civilization.

Back at the campsite, we did last-minute fixing and prepping before we head back to the foot of the mountain. Last glimpse of the campsite and last picture-taking. We packed our bags and left no trash. Our bags now feel way lighter. We were already racing against time since we’re already behind our schedule. We still have side trips to do. Everybody already geared-up and we started our descent. We passed the same trail during our ascent. I was waiting and hopeful for us to encounter even at least one wild viper as we weren’t able to see one during our ascend. As what I heard, Mt. Tres Marias is well-known for the wild vipers along the trail. But unfortunately, we, once again, weren’t able to see one. Maybe next time when I get to climb Mt. Tres Marias again. *cross fingers*

All of us were already cautious during our descent as we were already familiar with the areas that have slippery trails. We passed and stopped at the same riverbanks to have our short breaks. Almost at the last part of the trail, our guide decided to use the other trail as to avoid the very steep portions and for us to see another side of the mountain. More than 5 hours of knee wrecking descent, our legs started to shake. Some of us, especially those who just had their first major climb experience, already need assistance. Our guide was kind enough to carry their bag to ease their loads.

I, however, had a life-threatening experience. As we were traversing the other side of the mountain, the view caught my eye that I enjoyed it much. I snapped pictures every opportunity I can get. I was the sweeper that time and the last person on our line. Because I enjoyed the view so much, I did not notice my footing that I slipped on one of the slippery rocks. It made me almost fell on the side cliff. Thank God I was able to hold tight on the grass. If not, then I could have fallen on the cliff. Whew! It really made me sweat more. No shame though for only a few noticed and saw what happened to me as I was the last person at the back. Teehee!

Several hours passed and we were already several meters near the foot of the mountain. The view did not fail us. The sunset made it lovelier. 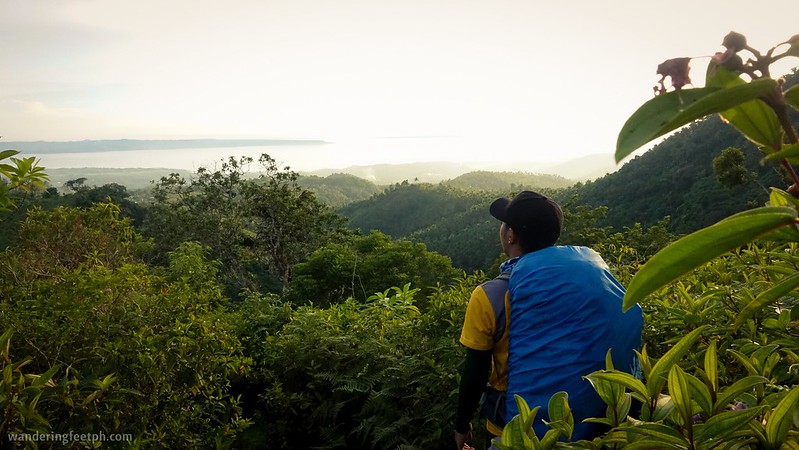 Seeing the flatlands and the established trail gave me the assurance that our long trek will finally be over. We can now rest our swollen feet and our aching backs. Looking back, I said my thanks to the mountain for the vivid memories and wonders I was able to witness. 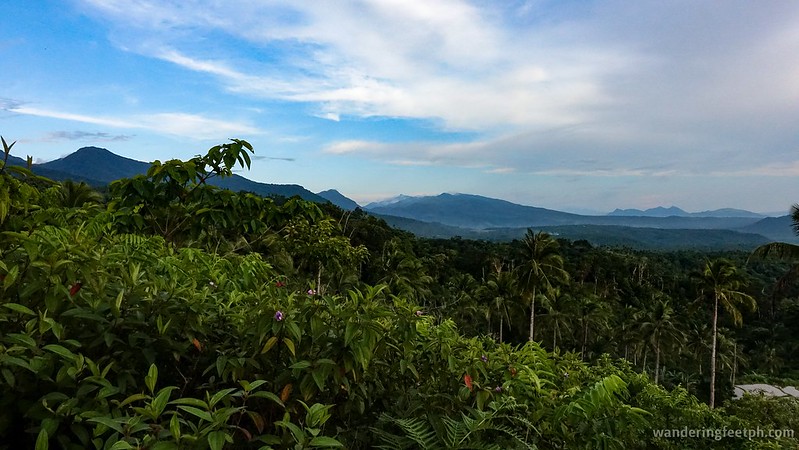 Excited and running late, we, the younger ones, managed to trail-run the course back to our jump-off point where our arranged van was waiting. Right when we arrived at the site, we unloaded ourselves and hunted for cold drinks to quench our thirst. The locals were hospitable and welcoming enough to aid us.

Is it too late for the scheduled side trip.

We were already way too behind our schedule, we cannot do anything but to peek, from the van’s window, at the lovely sun as it slowly sets over the horizon. Supposedly, we must be at Sambawan Island before 5 PM. We could have enjoyed the sunset more if we’re already on the island and not behind our schedule. But in mountaineering, we have to accept that not all plans will be met.

Check out our Sambawan Island Side trip here.

Mt. Tres Marias truly is a wonder. The lush trees and the surreal forest can easily put anyone in a trance of awe. I hope that someday when I get to climb it once again, the place will still be the same or better. I can only hope for the preservation of the mountain. I urge everyone planning to climb the mountain to please practice the LNT (Leave No Trace) principle. There is only one Mt. Tres Marias in this world. We cannot replicate what mother nature has molded for millions of years. Please keep in mind to always be a responsible visitor. Let us be responsible and help contribute to the preservation of the mountain and of mother earth.